Building a mobile application or any software isn't a one time task. It is an endless loop of iterations. You build, test, fix, release, collect feedback, improve and so on. In between those phases, there are endless actions and tasks that should be performed. Here comes the importance of automation.

At Instabug, we are trying to save the developers' time as much as possible. Hence, we adopted the idea of automation and we are trying to apply it whenever possible. One way to achieve this objective is through the Rules. Simply put, you can use the rules to automate all the repetitive actions that you perform on the dashboard.

Here are some scenarios where the Rules comes out to be very handy and helpful.

Let's look at this from the user's perspective. If they took the initiative to report a problem they encountered while using an application, it will always make them feel appreciated if they get notified that what they reported was fixed. They will definitely be motivated to be more engaged and loyal to the app. Instead of having to reply manually to each resolved report, you can add a rule that sends a message to the user who reported the bug automatically once the report's status changes to closed. Here is the setting that you can follow to use the described rule. 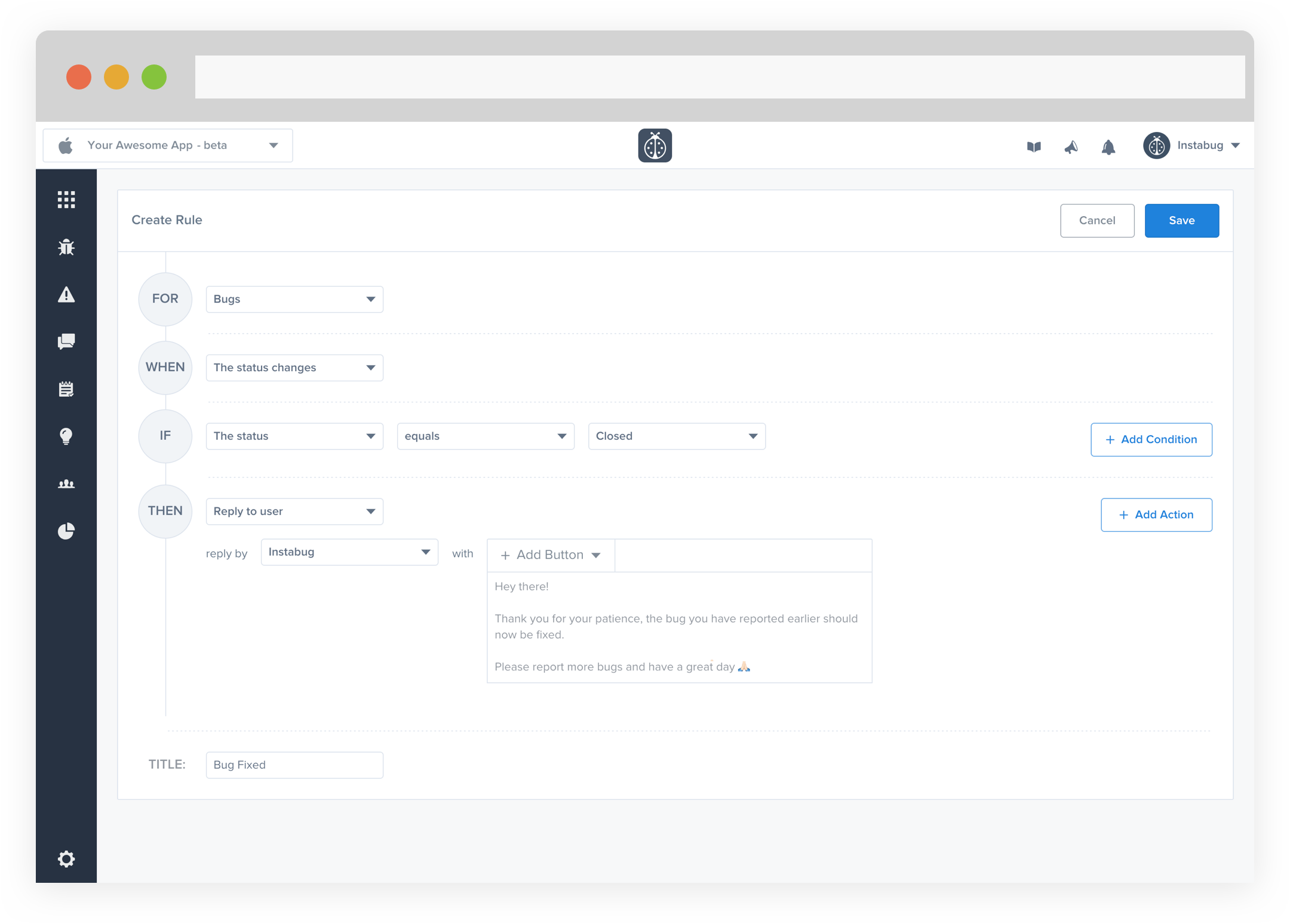 Another action that may make the users' experience better is to reply to them directly after they report a bug. You can automate this step by creating a new rule as in the following example. 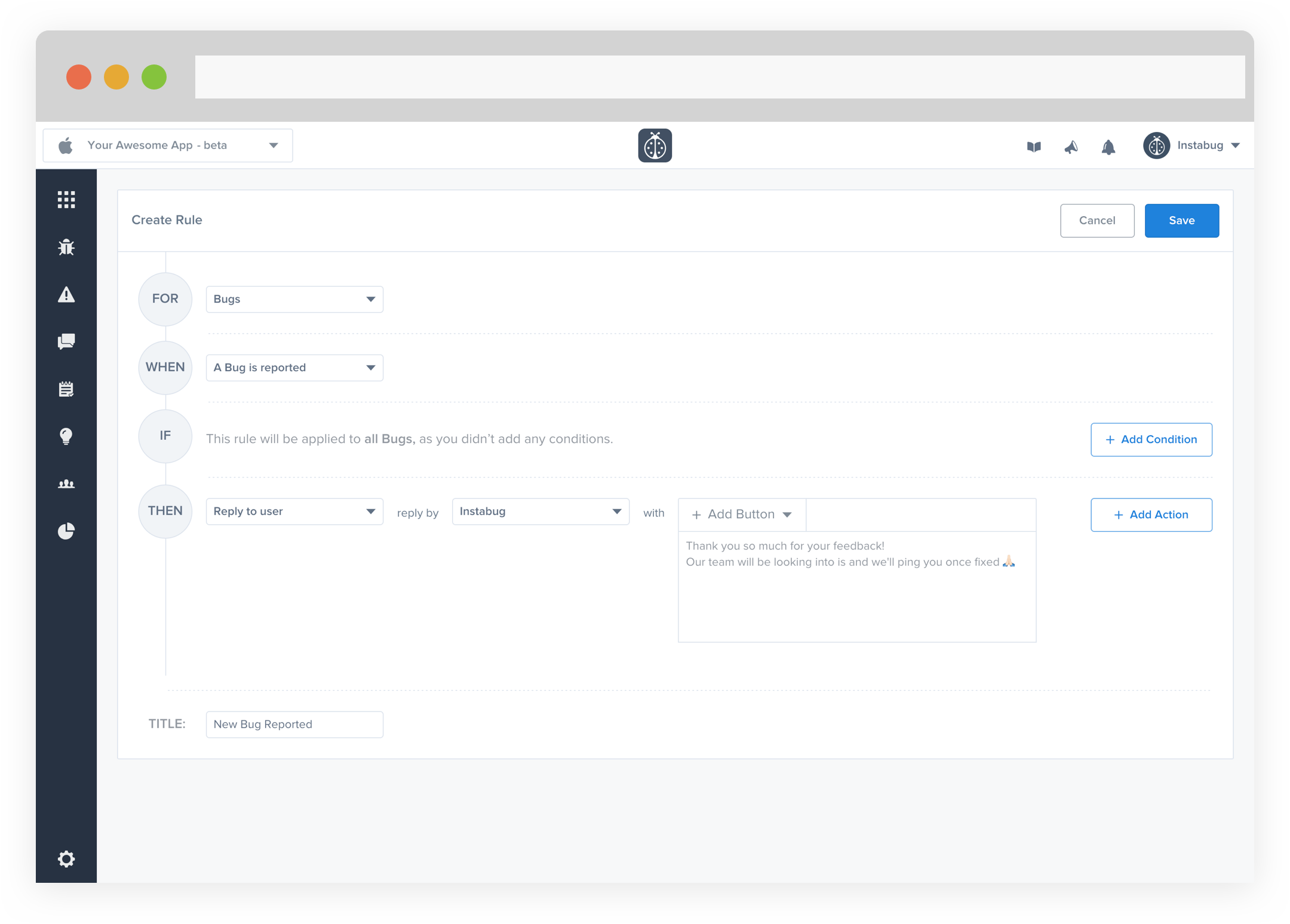 If your team is already used to a certain tracking tool, you can maintain the same process. We offer integrations with a lot of tools like Zendesk, Slack, JIRA, Github, etc. For more details about how to set up the integrations please check this section.
Again, instead of forwarding each report or chat manually, you can set up a rule that automatically sends them to you favorite tools once they get reported. You can also utilize the rules to make the forwarding more interesting. For example, based on the report category or tag you can select the suitable tool that the report should be forwarded to. 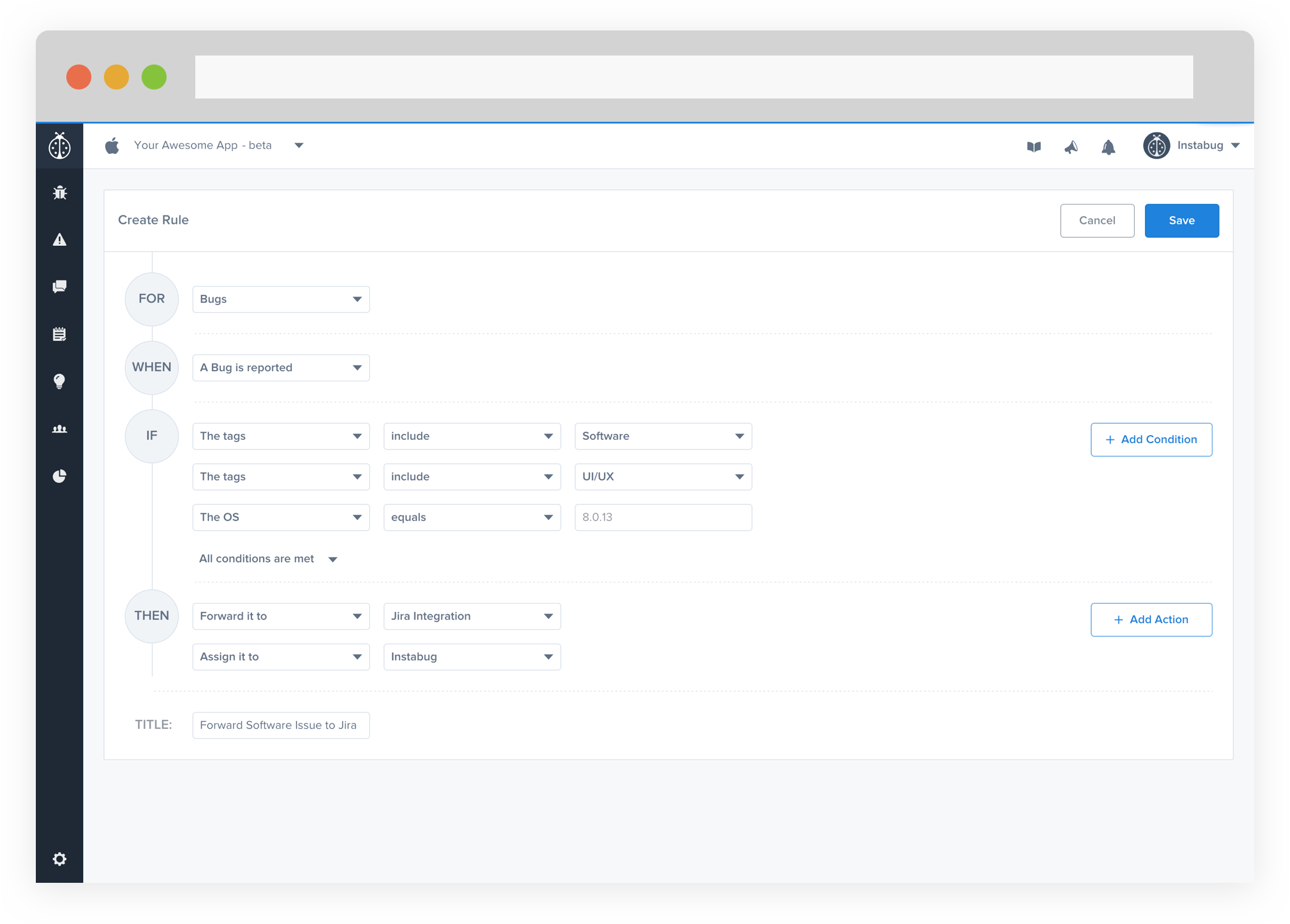 You can easily notify your beta tester or users that they should update their app to a newer version when the report a new bug. Withing the message, you can embed a button that either opens the application on iTunes, Google Play or the App Store. 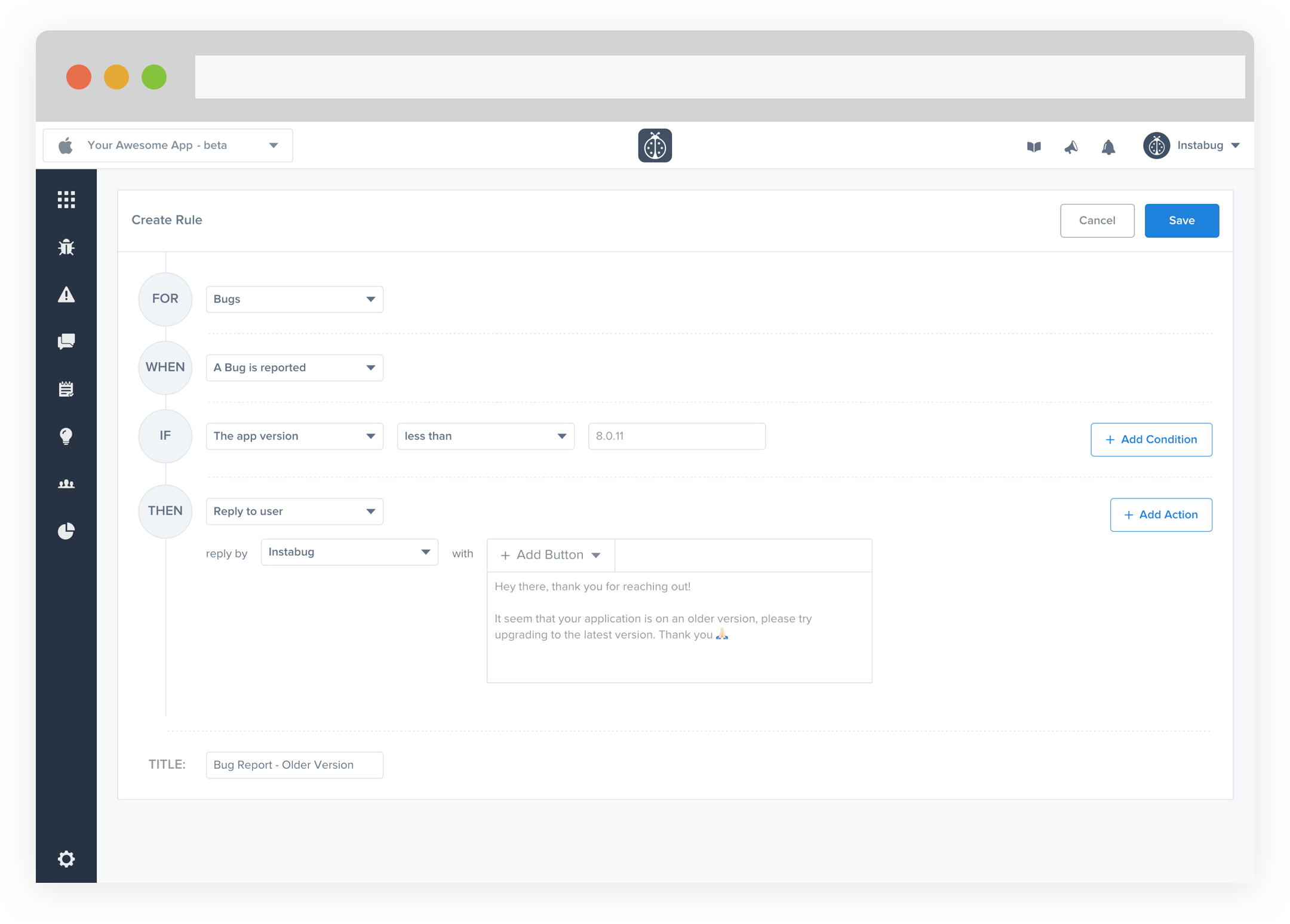 One of the actions that you will probably perform a lot is assigning the reports or chats to a team member. You can create rules to automate the process for you. The report gets automatically assigned to the relevant team member who should be handling it based on the conditions added to the rule.

Let's assume that one of the report categories is "UI", it makes sense to assign it to someone from the design team. 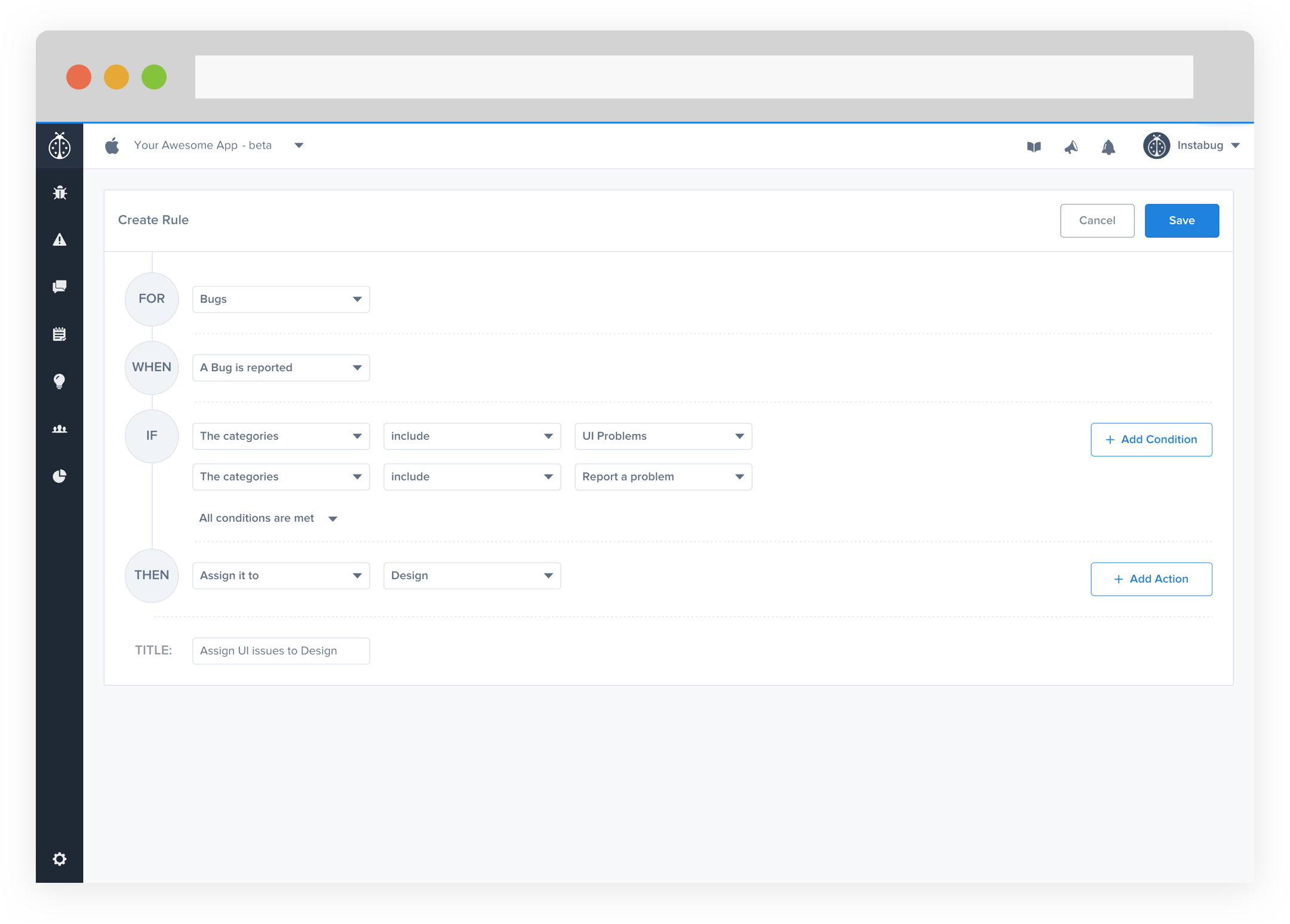 Another scenario, maybe you want to assign the report to a certain developer based on the current view. 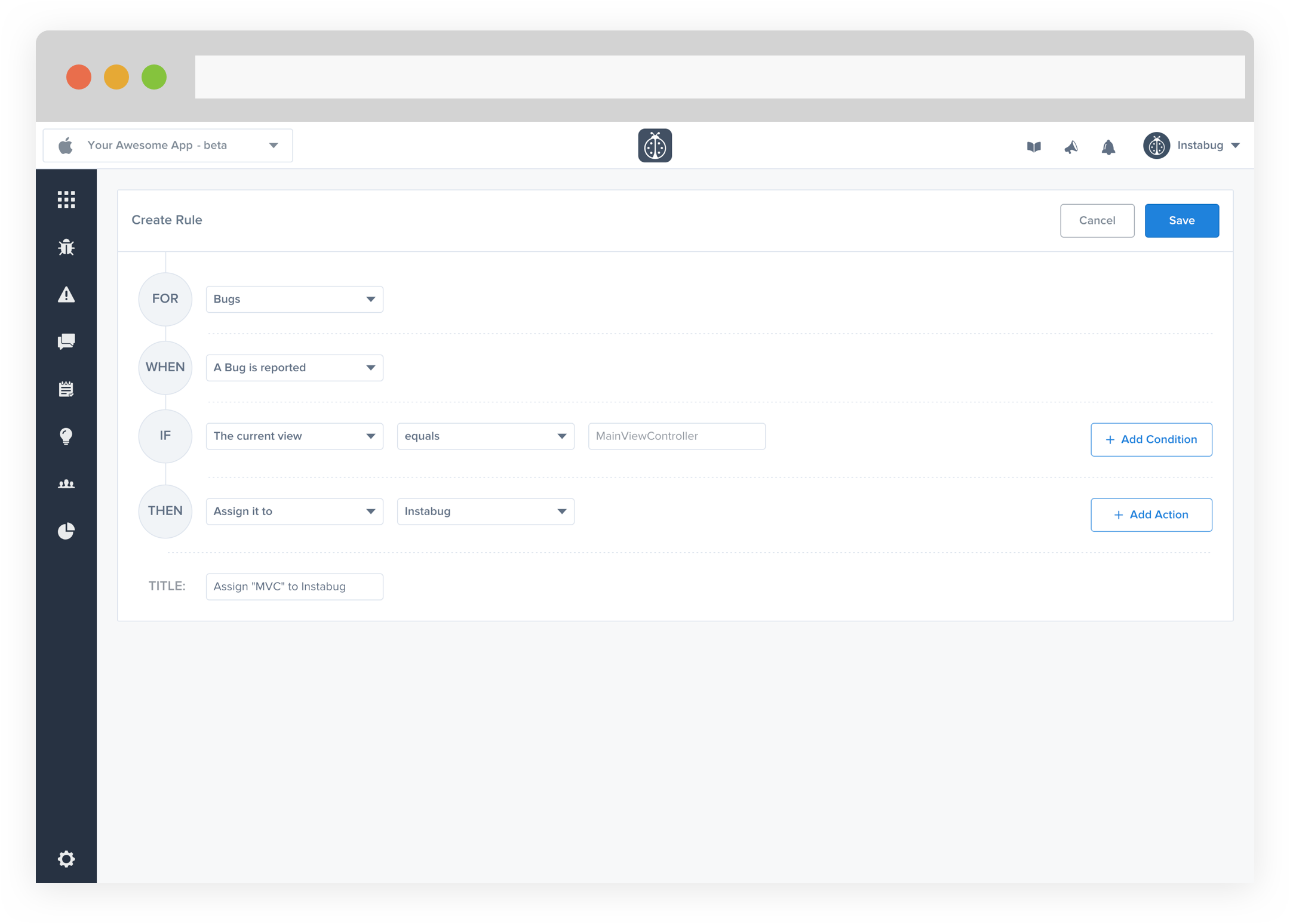 For more details about the report categories, check our Report Categories page.

Updated over 3 years ago