You can choose between three types of surveys when creating a new one: Custom Survey, NPS Survey, and App Rating.

Create your own custom surveys with any number of questions displayed to your user one by one, sequentially. You can select between three types of answers:

The default first question in an NPS Survey is "How likely are you to recommend to a friend or colleague?" The user must reply on a scale of 1-10, least to most likely.

Depending on the rating given by the user, they will be shown one of two possible follow-up questions:

From your dashboard, you can customize the text of any question in an NPS Survey.

This template is used to identify happy users and ask them to rate your app.

First, your users will see an alert, native to the OS, which asks if they are satisfied with the application.

You can set the frequency for how often this message shows. By default, it is set to every 30 days.

During the creation process, you can edit any of the text that will be in the alerts shown to the users.

Prompt users to update to the latest version of your application using this feature.

This feature lets you send native alerts to your users to update their application. The alert can be set to either:

This type of announcement can only use automatic targeting.

It can also be set to either show every session or every once every 7 days. By default, it appears after 10 seconds of the session (this is configurable). You can also specify the version for which this alert will show.

If your application can be found at a source different to the default store, you can set a custom URL to direct to. 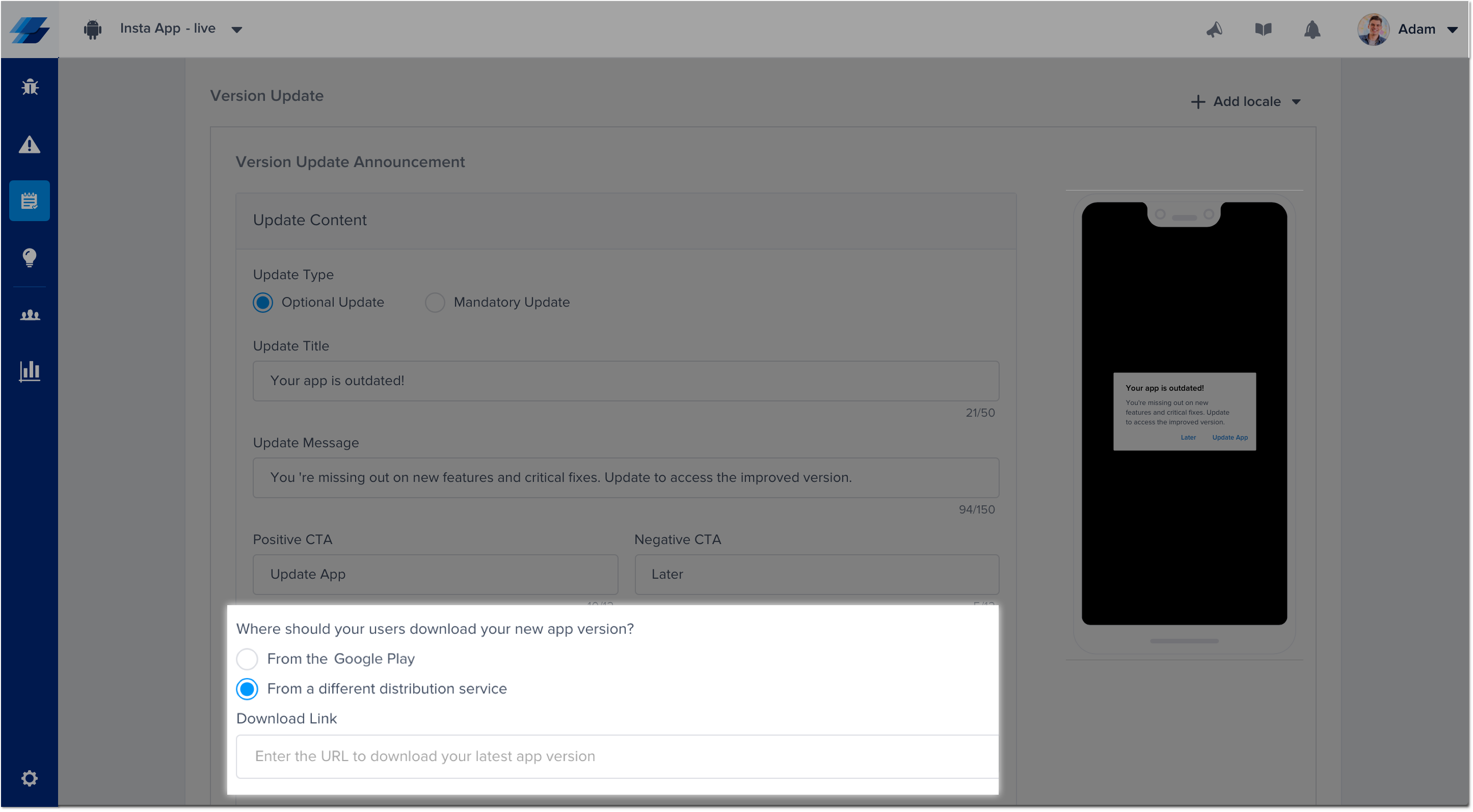 Alert users about new features and the latest improvements to your application using this announcement.

You can create a list of new features to show your users. Each entry in the list contains a:

This type of announcement can only use automatic targeting.

It only appears to the users updating to the version specified and not the new users who install the app on this version. By default, it appears only once on the first app launch to users on a specified version.

Note that while the SDK compares the version set in the survey targeting to the version name, if the version code is not changed, the SDK will not know that the version has changed, causing the announcement to not show.

You can display your surveys and announcements to your users in their language. To do this, you only need to add the locale when creating the survey, then add the questions in that language. 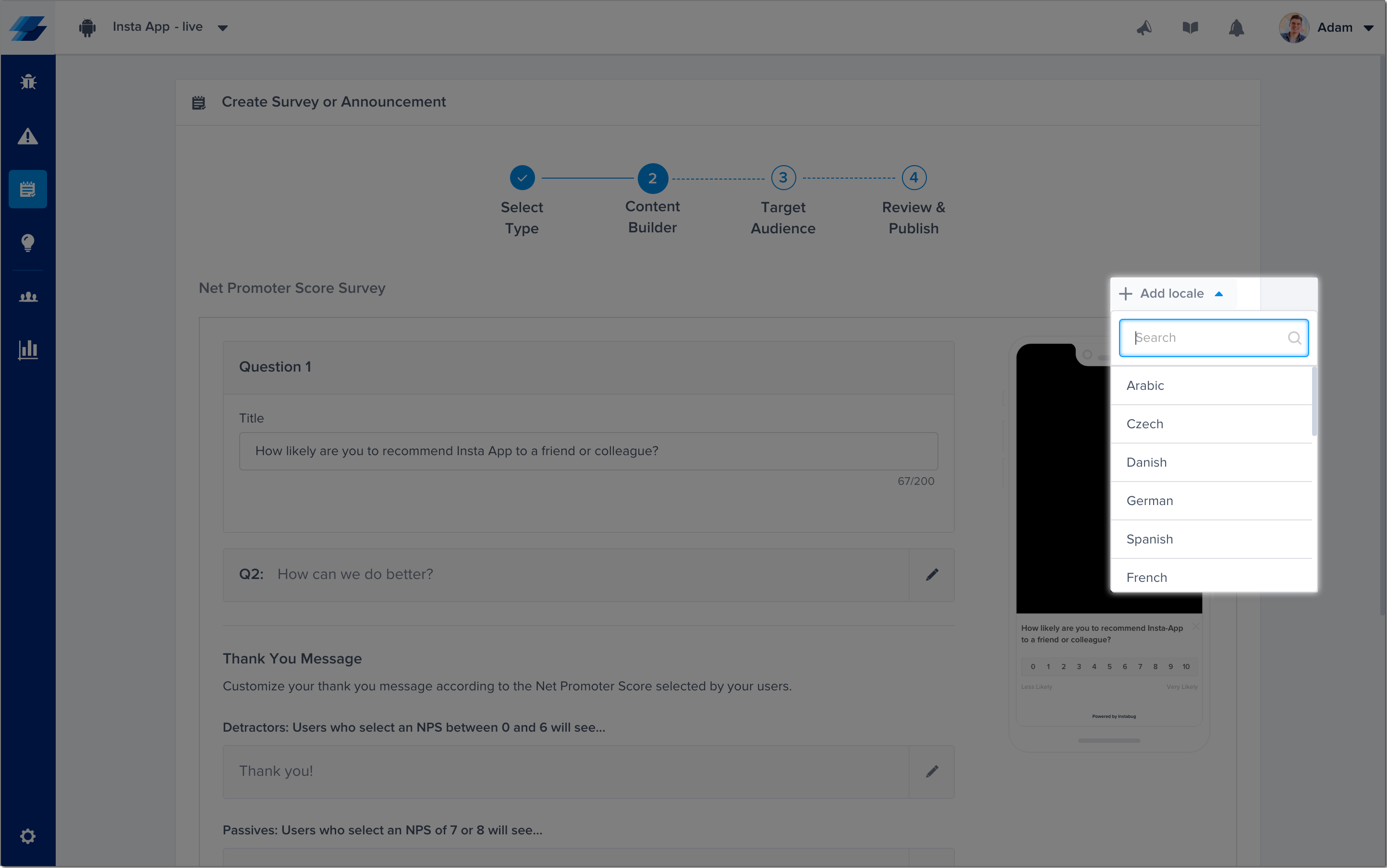 There are some rules that should be adhered to when adding and editing locales and languages for surveys and announcements.

For each locale you add, a new tab will be added in the dashboard from where you can modify the text that will be displayed for that locale. Other changes to the survey, like adding or removing questions, can only be done from the default locale tab. 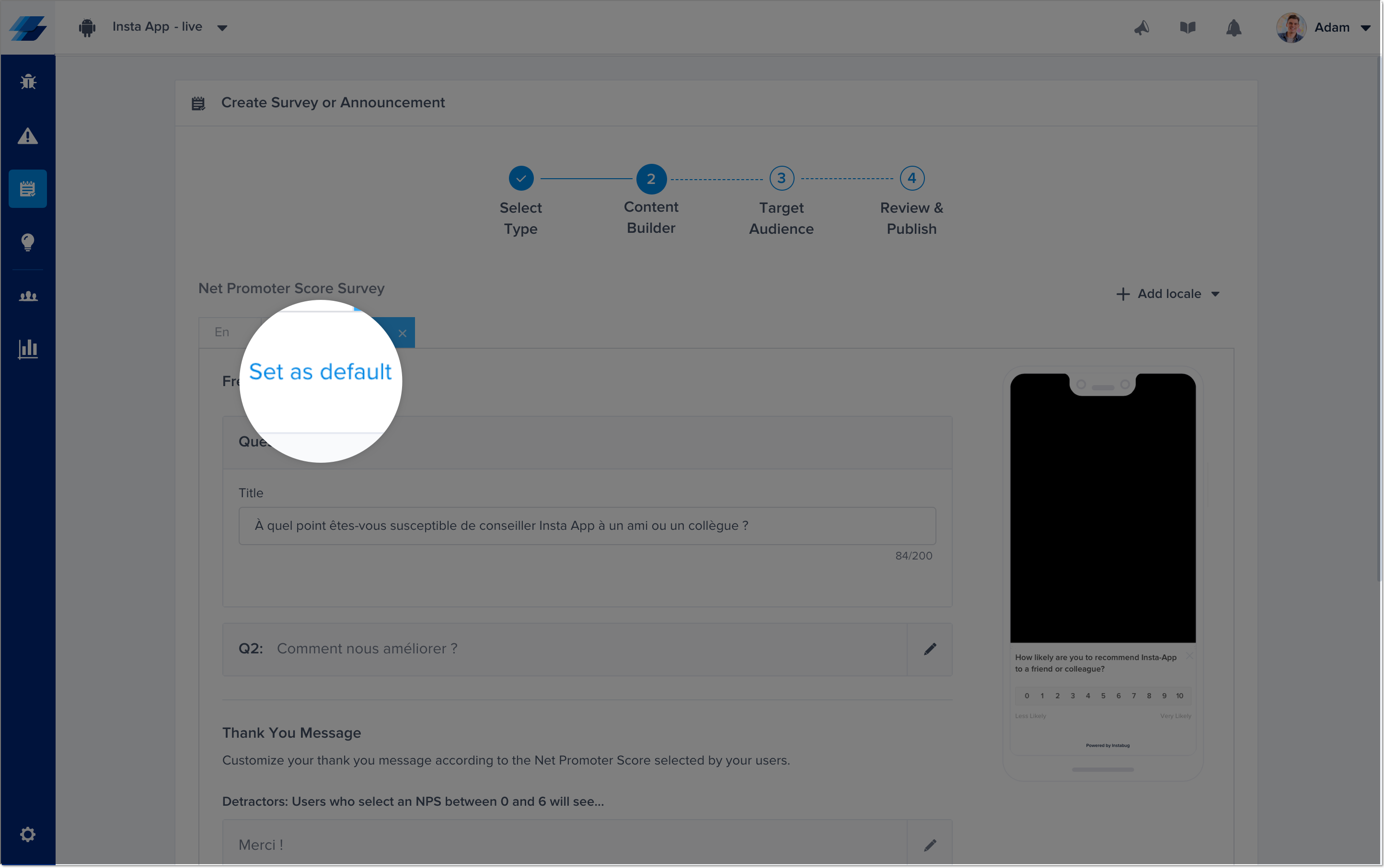 The SDK determines which survey language is shown based on a few priorities. If you use the set locale API, this locale will take precedence over the device locale so the survey will be shown in the locale you set through the API. Otherwise, surveys will be displayed in the language that matches the device locale. In case you don't support this locale, the survey will use the default language.

Currently, most locales supported by the SDK are supported in the survey localization, with more locales to be added soon. Below is the list for supported locales.

Multiple locale surveys will appear starting from version 8.3. If you're targeting older SDKs, only the default survey locale will be shown. All surveys created before version 8.3 will continue to work with only a single locale.

If you need to create a copy of an already existing survey, you can duplicate it by opening the survey itself from the survey list, and clicking on the duplicate button in the survey results page. Please note that any duplicated survey is placed directly in a draft state, so you'll have to publish it manually once the duplication is complete. 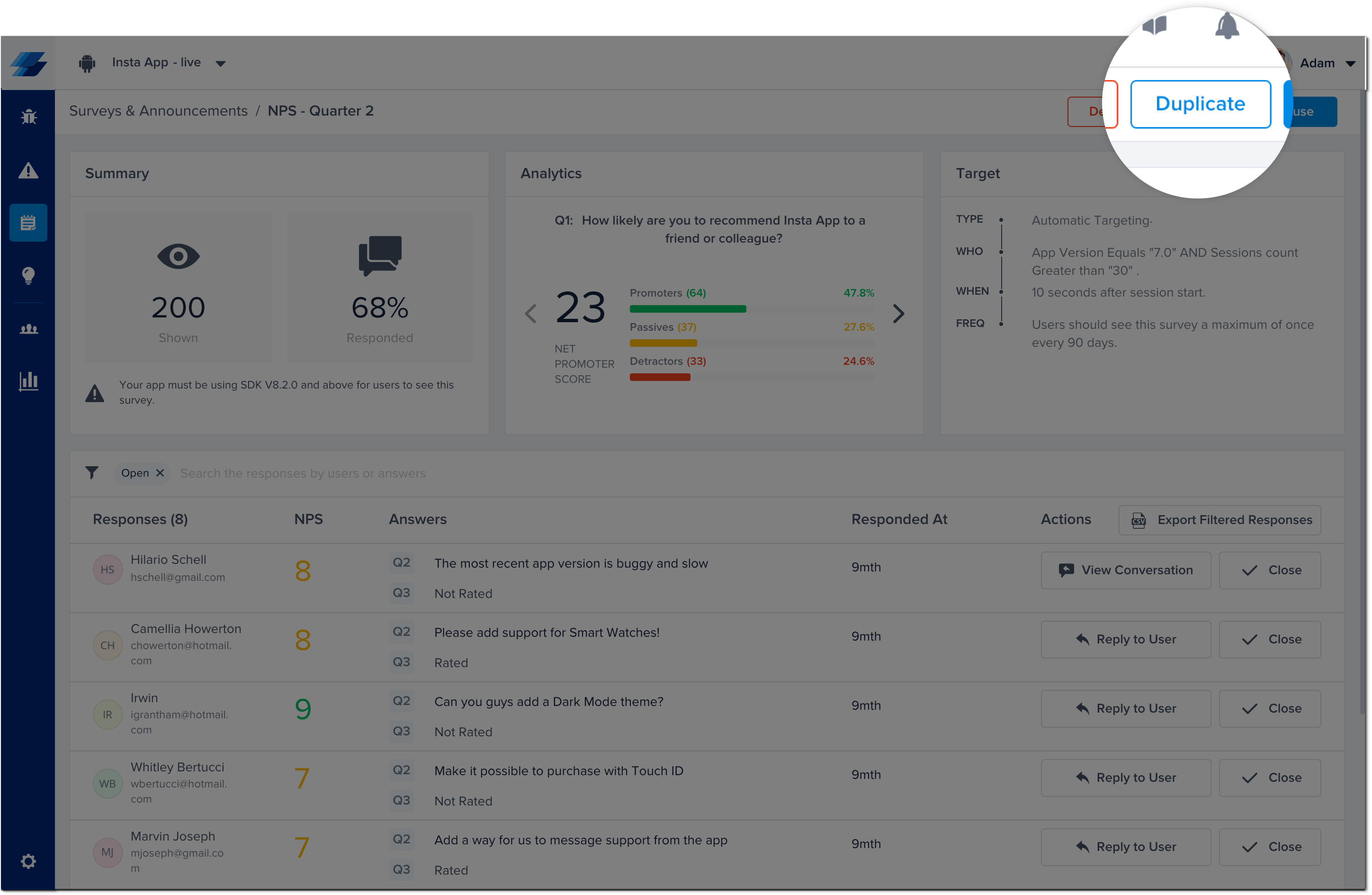 Updated over 1 year ago

Now that your surveys are out in the wild, check out how to show them to specific users only and how to make your in-app surveys match your UI.